UPM sent the biggest number of athletes among the universities and secured the most medals. 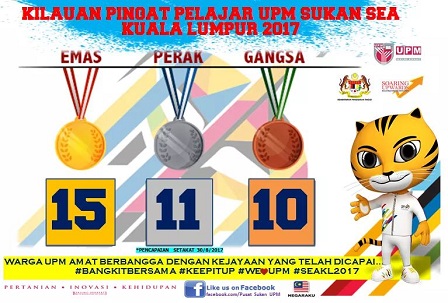 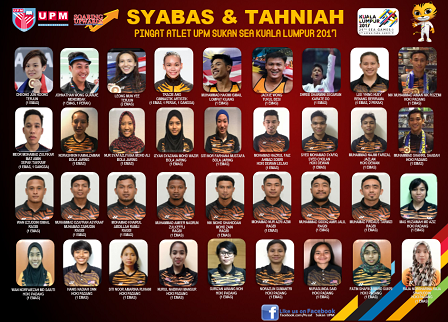 Out of 264 athletes from higher education institutions in Malaysia participating in the SEA Games, UPM topped the list with a total of 75 athletes which formed an overall 874 Malaysian athletes.

Malaysia ranked first by winning 145 golds, 92 silvers and 86 bronzes, followed by Thailand and Vietnam in the second and third place.

A total of 1000 UPM students from all colleges and faculties joined the KL2017 Team Malaysia Chanters Programme (SEA Game Chanters), and 611 of them were students from the Centre of Foundation Studies for Agricultural Science.

The Director of the Centre, Prof. Madya Dr. Norihan Md. Arifin said students’ participation was on a voluntary basis.

"Instilling the element of volunteerism among students is important in our strive to produce distinguished graduates. This view is parallel with the Vice Chancellor’s, Prof. Datin Paduka Dr. Aini Ideris, proposition that ‘Benevolence is the Pillar of Excellence’”.

"They were committed in attending their lectures before leaving for the chanter programme, and if they had to miss the lectures, they would acquire the relevant inputs and learning materials from friends and lecturers involved," she said.

The Director of Sports Academy, Prof. Shamala Subramaniam described UPM’s participation in the Team Malaysia Chanter programme as a great honour to UPM.

"Athletes recognised the impact of the chants in inspiring them to become the overall champion of our homeland," she said.

The objective of forming the chanter team was to inspire the Malaysian contingent to realise the 111 gold medal target.