KUALA LUMPUR - Never be satisfied with the work being done, instead continue to look for opportunities to the highest level.

That is the philosophy of life held by the Lecturer of the Department of Mechanical and Manufacturing Engineering, Faculty of Engineering, Universiti Putra Malaysia (UPM), Professor Ir Dr Mohd Sapuan Salit until he succeeded in the field and made the country famous on the world stage.

In fact, he who has been involved in engineering for more than 20 years, has done a lot in the field and the effort has put his name on par with western figures.

His contribution in the study of natural composite materials (bio composites), especially in the field of automotive engineering is not small, thus qualifying him for world recognition when he was named the recipient of the International Automotive Engineering Community (SAE) award in Detroit, Michigan, USA, earlier this month.

More proudly, Mohd Sapuan is the first figure from outside the United States to receive the SAE Subir Chowdhury Medal of Quality Leadership. 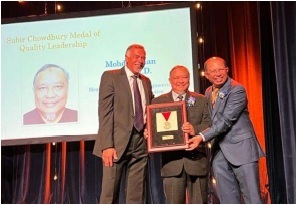 Sharing further his success story, he said, his contribution in the field of automotive engineering which was given the recognition was based on the results of his research on the creation of vehicle components using materials from natural sources.

According to him, he has done a lot of research on the use of bio -composite materials consisting of metric fibers and polymers for use in the automotive industry.

"So far, all the production is still in the study stage, but we have worked with Proton to use the material on its vehicles but it has not been commercialized yet," he said when contacted by Getaran. Mohd Sapuan said, his research on bio composite materials did not stop there and it continued in the production of furniture.

“Now we are in the process of producing office chairs using bio composite materials in collaboration with an international furniture company.

"However, it is still in the research phase and will take some time to produce," he said.

Commenting on his achievements which were recognized by the international engineering community, the Teluk Intan, Perak native said it was something he was very proud of as he was able to 'stand as high and sit as low' with engineers from giant automotive companies around the world.

He explained that out of the 20 categories recognized, he was the third person called to the stage to receive the award.

In fact, he said, he was even more proud when all the candidates for the recognition were not bigots.

Instead, he said, they have expertise in the automotive field from leading universities in the United States and giant companies, including General Motors, Dynax Corp, Caterpillar Inc as well as JD Power.

"So as a Malaysian, I am very proud to be able to make the country famous at the highest level," he said.

The Smart Technology for Paddy Cultivation – The Malaysian Experience